Heres a little look at the start of the basic class "The Soldier."

Unlike most Powered by the Apocalypse games, theres no planned limitations on how many people can play any particular class. The soldier is your average X-Com Rookie!
Posted by Lord of Wynn at 13:35 No comments:

One thing that has always stuck in my mind when I've been thinking about AHX: I want a way to replicate the mission select options from the newer X-com games. 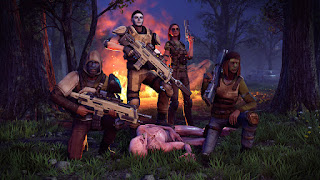 For those of you who havn't played, it roughly boils down to the following concepts:

So, in light of this - At the beginning of the game session, the players should work together to answer the following:

The Organisation have discovered alien activity... (Choose One)
The Invaders have landed troops in a town and are abducting them for unknown purposes
The Invaders have landed troops in a capital city and are wreaking bloody havoc
The Invaders have landed a ship for an unknown purpose - We should capitalise on the opportunity
Our fighters have splashed an enemy ship - We should capitalise on the opportunity
We've discovered an Invader stronghold - We cannot allow it to grow unimpeded
A high profile civilian is believed to be in danger and we need to make sure they don't get attacked
An important civilian is in hiding during an Invader attack - We must extract them immediately.
Civilians have reported strange sightings in their local area. We should investigate.

The operation takes place in...
The local civilian response to The Organisation is...
The Operations name is...

Once The Squad has decided on which troops they are taking and which equipment, the Alien Commander should answer the following:

So for example, the players might choose:
The Organisation has discovered alien activity... The Invaders have landed a ship for an unknown purpose - We should capitalise on the opportunity
The Operation takes place in London
The local response to The Organisation is Desperate
The Operation's name is Merciful Pelican